The S&D 7Fs were built in two batches; ours was in the second group and built in 1925. Here’s a short history of the class.

53808 passes through Evercreech New with a goods train on 9 September 1961. [Photo by David Milton/S&DRT collection.]

Two batches of SDJR 2-8-0 mineral engines were built. The first batch of six locomotives were built to the design of Henry Fowler in the MR workshops at Derby. Construction began in 1913. Numbered 80-85, they were delivered to the S&D between March and December 1914. Each cost £3,500.

The locomotives were the first on the S&D to have outside cylinders and Walschaerts valve gear. The cylinders were inclined at 1 in 12, to clear the platform edges. They were too long (at 59ft 9¾in) to be turned on the S&D turntables, so were provided with tender cabs. Whitaker’s tablet-exchanging apparatus was fitted to both sides of the tender.

The locomotives were amongst the most powerful in the country at the time. The design allowed for the steep gradients and tight curves of the Bath Extension. Three brake cylinders were used; two operated on the front faces of the three rearward pairs of coupled wheels, whilst the third cylinder actuated brake blocks on the rear faces of the front coupled pair and the clasp brakes on the pony truck. Sand was held in six sand boxes, and was steam operated.

The first batch of locomotives soon received some minor modifications: flattening of the dome, removal of the chimney lip & cab ventilators (to permit entry into Radstock shed); removal of the superheater dampers; shorter buffers; gravity sanding; three-link couplings; mechanical lubricators. The tender cabs were not liked by the enginemen, and were all removed by 1924.

In 1925, a second batch of locomotives, numbered 86-90, were delivered. They were built by Robert Stevenson & Co. Ltd at a cost of £6,570. The second batch had larger boilers than the first, and were slightly shorter but 2 ton heavier, giving a greater factor of adhesion. The tender was a Fowler standard design, and shorter than the Deeley pattern carried by the earlier batch. These new engines were driven from the left. A wet sanding system was fitted.

In 1926, the first batch of locomotives was modified to bring them into line with the design of the second, though the right-hand drive was retained.

In 1930, the newly-formed LMS allocated the S&D 2-8-0s numbers 9670-80 (so No. 88 became 9678). Two years later, a further renumbering took place: 13800 to 13810. Standardisation within the LMS locomotive fleet by 1934 rendered obsolete the larger non-standard boilers of the second batch of locomotives. Smaller, standard boilers were fitted, which resulted in the fitting of a distance piece on top of the smokebox saddle. In 1935, the pony truck brakes were removed, and, just before war broke out, steam sanding gear was fitted. 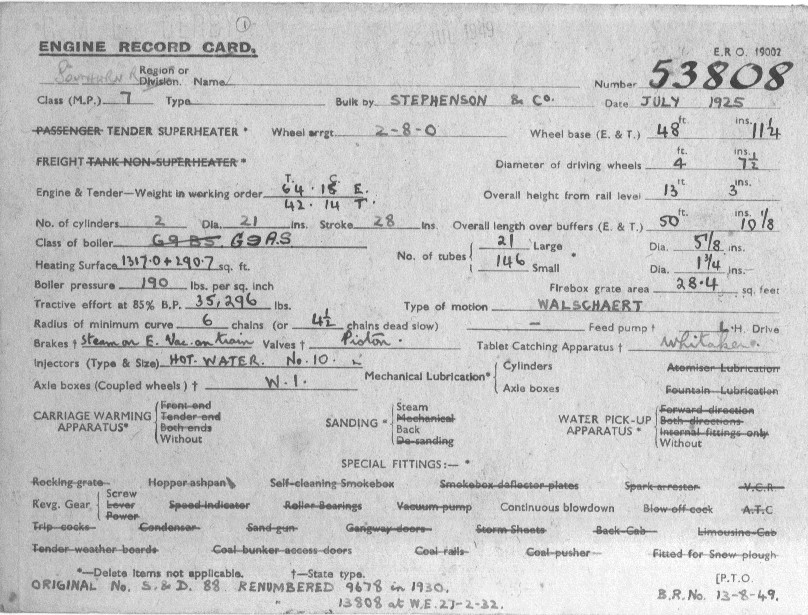 As post-war stability and prosperity developed, passengers returned to the railways in large numbers. The primary route from the north and the midlands to the south coast was down the S&D. The 2-8-0 mineral engines were pressed into service on Summer Saturdays, and gave good service. However, by the end of the 1950s, the motor car and lorry were becoming the preferred method of transport, and the 2-8-0s began to be taken out of service as passenger numbers and freight declined. 53800 was withdrawn in 1959, followed in 1960 by 53802. The first batch became extinct in 1962. Of the second batch, 53810 was withdrawn in December 1963, with the remainder being withdrawn during 1964.

See also How the S&D 7Fs came into being.