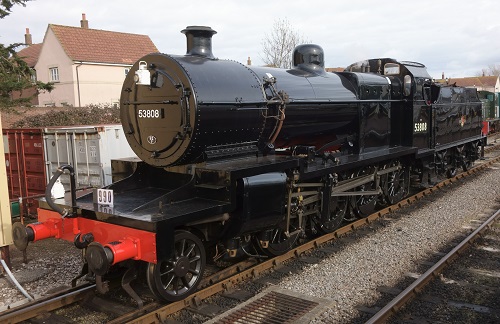 The new agreement will see 53808 move to the Mid-Hants. Railway for the remaining duration of the boiler certificate.

The Watercress Line is delighted to welcome 7F 53808 owned by the Somerset and Dorset Railway Trust on long term hire.

53808 is one of two surviving locomotives of a special class of engine built to cope with the steep gradients of the old Somerset and Dorset Joint Railway. As such it is a perfect fit for our line, known to generations of railway enthusiasts as “The Alps” because of the steep gradients in both directions with a sharp summit at Medstead.

We look forward to 53808 joining the running fleet during August and operating alongside another locomotive 76017 that also ran on the S&D.

In welcoming the 7F to the line General Manager Simon Baggott said “ We are delighted that the Somerset and Dorset Railway Trust have chosen the Watercress Line as a base for their locomotive.  The 7F is such an iconic design and its hill climbing capabilities will be of great use.  The Watercress Line and the Somerset and Dorset not only shared steep gradients, but both were railways operated by the LSWR, and both were single track main line railways.  We hope to use the 7F to help tell the story of these rare, but important lines. Our gala planned for the 16th 17th and 18th of October will naturally now have an S&D theme.”