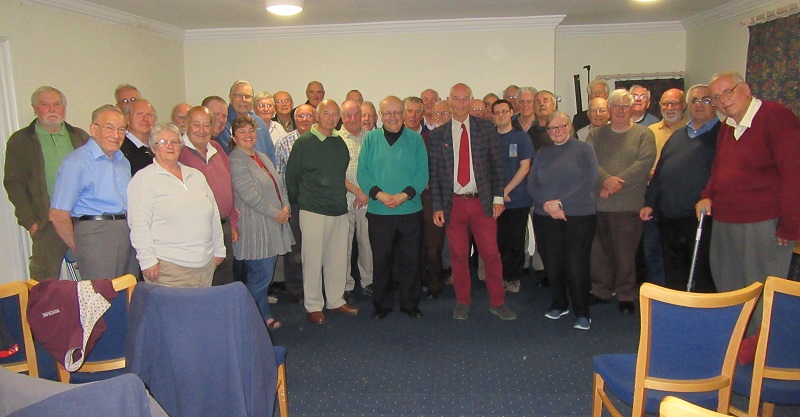 This year has already seen one significant 30th anniversary marked – that of the return to steam of our restored S&D 7F, No. 53808 – only to be followed by another: 30 years of the Dorchester Area Group!

Peter and Heather Foster started the group at their house on a cold and frosty evening in January 1987 with 18 railway enthusiasts attending.

Thirty years on, around 40 members of the Dorchester Area Group celebrated their 300th meeting atthe Colliton Club in Dorchester during October, with a special celebration programme by Antiques Roadshow personality Dr. Paul Atterbury. He has a special interest in railways and spoke about the social aspects  –  how the coming of the railways enabled ordinary people to travel longer distances and so popularised resorts like Weymouth. Dr. Atterbury, who lives in Weymouth, showed a number of slides illustrating the growth of the railway system in Victorian times and then the decline resulting from the Beeching cuts in the 1960s.

“It doesn’t seem like 30 years since we started, but presenting 300 programmes over that time is quite an achievement,” comments Peter. “Our success is thanks to the loyal support of a regular core of local people who stick with us. We have a good atmosphere. I do thank Heather for all her hard work behind the scenes and our small organising team which includes Jim Boudreau and Jeff Mowlam. We are glad that our members have appreciated our varied programmes and there is a feeling of achievement that we have been able to entertain them for over 30 years.”

​Peter and Heather also have railway interests elsewhere – they have been active on the Swanage Railway for many years and Peter has been the stationmaster at Harman's Cross for the last 10 years.

The next meeting is on Friday 24 November at 7.30pm when noted local railway historian Brian Jackson will give an illustrated programme on “160 years of railways in Weymouth.“ Meetings are on the last Friday of every month – except in August and December – at the Colliton Club. Further information from Peter and Heather Foster on 01305 262121.