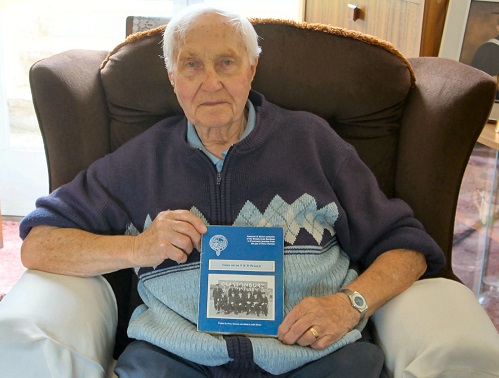 The Trust regrets to record the passing of Percy Parsons, who died on Friday 16 August aged 96.

Percy started his railway career at Edington on the S&D's Highbridge branch in 1937 and in retirement lived in the village of Chilton Polden, just down the road from Edington.

A regular attendee at the Trust's AGMs and on the Annual Special Train, Percy had authored one of the Trust's Blue Books many years ago – this one called Lines on an S&D Branch – and had provided a large amount of material from his memories which have been, and will continue to be, published in the Trust's quarterly magazine, Pines Express.

Percy was interviewed in the pub at Edington by presenter Rob Bell for the S&D part of the Channel 5 series Walking Britain's Lost Railways which was first broadcast in September 2018.

In addition, Percy had also provided his memories for a new book which will be published shortly, and which contains extraordinary detail and a very interesting insight into the workings of the S&D. At the AGM, a draft copy was available to view but Percy was unsure of whether he would see it published. Indeed he did not, but the detailed account in the book will be a lasting legacy of his time on the S&D.